Albuterol, used to treat bronchospasms caused by asthma and COPD, is commonly found in households. It can be in various dosage forms (aerosolized canisters, tablets, extended release tablets, powders and solutions). All formulations have the risk of causing toxicosis in pets. Of particular concern are aerosolized canisters. If punctured (during chewing for example), the entire contents of the canister may be released into your pets mouth. 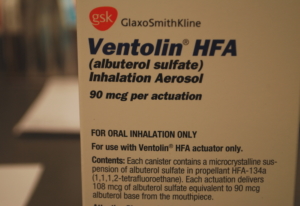 Albuterol is used as a bronchodilator in veterinary practice (for cats, dogs, and horses). However, consumption can be toxic if dosed inappropriately. It is important to monitor your pet for adverse effects and/or signs of toxicity while treating them with this medication.

Signs and symptoms of toxicity: increased heart rate, panting, excessive thirst, vomiting, weakness, blood-shot or glazed eyes, agitation, and shaking. Signs may be seen within minutes of exposure, or delayed by several hours if an extended release formulation was ingested.

Toxic consumption: There is no established toxic threshold for pet consumption. All incidents of accidental exposure should be reported immediately.