Ibuprofen and naproxen are both classified as NSAIDs, used in human medicine for various purposes including inflammation, pain and fever. These products are a common source of pet intoxication because well-meaning owners will give them to pets to treat ailments. Common products containing ibuprofen are Advil and Motrin, while Naproxen can be found in Aleve. 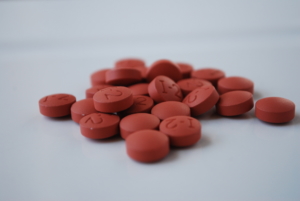 These products should not be given to animals due to the risk of toxicity. Always consult your veterinarian before giving your pet any medication. As little as one 200 mg ibuprofen tablet can toxic to cats and smaller dogs.

NSAIDs are also considered a potential toxin for horses that are not eating. Horses constantly secrete stomach acid. In the absence of food, giving a horse an NSAID greatly increases the risk of gastric erosion. This should be avoided if at all possible.

Ferrets are also indicated for this toxicity.

Signs and symptoms of toxicity: Loss of appetite or refusal to eat, abdominal pain, vomiting, diarrhea, increased production of saliva, and melena (black, tarry stool). Signs of toxicity (particularly gastrointestinal symptoms) can be seen 2-6 hours after ingestion. However, serious complications may not be seen for 4-5 days post-ingestion.

Naproxen: There is no established toxic threshold for pet consumption. However, signs of toxicity have been noted in dogs that have ingested doses of 5 mg/kg (2 mg/lb) of body weight.