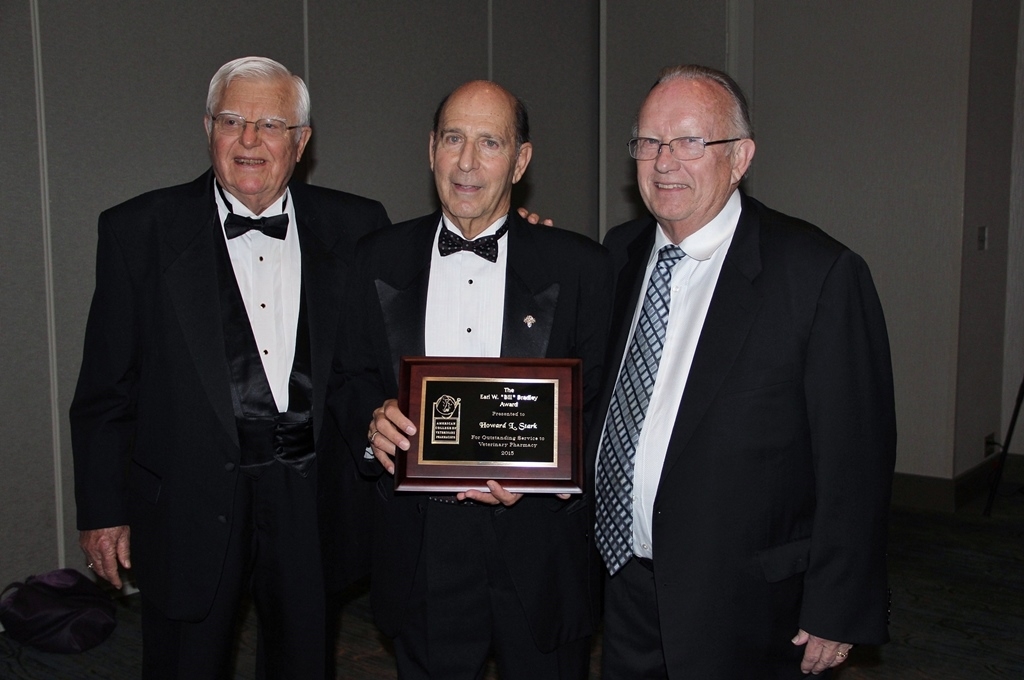 Fort Lauderdale, FL, February 27, 2015: The American College of Veterinary Pharmacists presented the 2014 Earl W. “Bill” Bradley Award to Howard L. Stark, of Overland Park, Kansas, at the College’s 2015 Annual Educational Conference at the Marriott Harbor Beach Resort in Fort Lauderdale, Florida. The presentation was made during the Presidents Banquet Friday evening, February 27th. The award is presented to a member who has shown outstanding service to veterinary pharmacy.

Howard Stark graduated from the UMKC School of Pharmacy in 1958 and opened his first pharmacy practice on the Baptist Medical Center campus in November, 1966. Howard was inducted as a Fellow of the ACA in 1969 and a Fellow of ACVP in 1998. He served for many years as ACA Regional Director for Region 7, Chairman of the ACA’s Third Party Committee as well as the Industrial Relations Committee, Chairman and Co-Chair of ACA’s Admission Committee and served as President of the Kansas City Chapter of the ACA. He was elected as the President of ACA in 1974. In 1975, he served as Chairman of the Board for the ACA.

Howard has served, and is a member of numerous organizations within Kansas City such as the Greater Kansas City Pharmaceutical Association and the Pharmacy Business Associates of Kansas City. He has received many honors and awards throughout his career and has been honored by the Missouri Pharmaceutical Association as “Man of the Year,” along with “Outstanding Alumni,” given by Univ. of Missouri Alumni Association. He serves on the advisory boards of both the Epilepsy League of Greater Kansas City and the Parkinson’s League of Johnson County, Kansas.

Howard recently sold three pharmacies in Overland Park but is taking only a semi-retired status, as he continues to work part-time in these pharmacies.